D'arc Hoshino is the partner of Tensai Ikkyū.

D'arc is a teenager of average height who has dark skin and partially tied-back umber hair with golden eyes. D'arc is usually shown wearing the Nanae Island Third High School girls' uniform, the rest of the time in a maid costume.

D'arc is never seen wearing male clothes. On page 150-152 of "Tensai's Reluctant Deduction (壱級天災の極めて不本意な名推理)" an illusion of genderbent D'arc and Tensai are shown.

D'arc is primarily shy and optimistic. In contrast to Tensai, who is loud and brash, she is quiet and kinder to people.

She seems to have an attraction towards Tensai Ikkyū, which has not been completely proven, but is strongly implied. D'arc has always been seen fawning over her. She appears to be a bit of a crybaby at times.

The anime makes a point of introducing Daruku as an "男の娘" otoko no ko.[1] Though born male, and honest about it, D'arc is treated as a girl by the majority of the cast. Jūgo initially discovered D'arc's biological sex by flipping up her skirt, revealing the legs of her boxer-briefs. This prompted Tensai to say that she was a femboy.[2]

D'arc appears in the anime as a first year student. 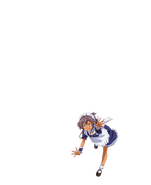 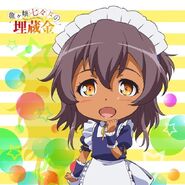 D'arc and Tensai introduced to the class by a teacher.

D'arc's appearance in Tensai's reluctant deduction. Stunned in the special place
Add a photo to this gallery

Retrieved from "https://nanana.fandom.com/wiki/D%27arc_Hoshino?oldid=6443"
Community content is available under CC-BY-SA unless otherwise noted.