Jūgo is a young man of average height, who has brown hair and purple-blue eyes (as stated by Yurika Yumeji he is kind of attractive).

He is usually seen wearing his school uniform with a red undershirt but also wears shorts, a solid undershirt, and sometimes an open short sleeve button up vest.

When Nanana dislocated his shoulder, he briefly used a cloth sling to help it heal, no cast or brace.

Jūgo is a level-headed teenage boy who seeks to live an ordinary life. He keeps up with his training every day to keep up his strength, knows how to fight, and how to fall without hurting himself, due to his previous affiliation with Matsuri, a masked thieves syndicate. He was exiled to Nanaejima after speaking against his father, though, and often gets into fights with people he doesn't agree with or like.

He has a slight perverted side, as seen with his obsession with maids, when he risked a dislocated shoulder to fondle Nanana, tried to peep on the girls in the hot springs and got his eye poked as punishment, made threats of fondling Yukihime, and trying to peek at the girl's panties while injured.

The son of the Head of Matsuri, a thief gang, some believe that he was sent to collect information on Nanana's Collection. The reason he gives to being at Nanaejima is that he had a falling out with his father and was banished to the island to finish his schooling there instead of his hometown.

Initially, Jūgo was shocked to learn of her status as a ghost and being reluctant to have Nanana as a roommate and only conceded as he has no means of moving out. However, over time, Jūgo warms up to her and swears to find her killer, to help Nanana to pass on. Their relationship is most significantly characterized by Nanana coaxing Jūgo into purchasing pudding of various types and quality for her, sometimes even making him do so late at night, to the point that buying pudding becomes an instinctive routine for Jūgo rather than an obligation. Occasionally, they have playful fights instigated by Jūgo that are either physical or within a video game, with Nanana consistently winning.

Jūgo and Nanana share a relationship built on immense mutual trust: Nanana bets with Tensai that Jūgo will never break their promise no matter what, and wins, while Jūgo insists that he will only act if he is sure that's what Nanana wants. They care deeply for each other, with Nanana comforting Jūgo when he is conflicted, and Jūgo becoming infuriated when he learns of how Hīyo Ikusaba neglected Nanana and only used her to find Nanana's Collection when they were roommates.

On multiple occasions, Jūgo questions his resolve, wondering if he truly wants Nanana to move on now that they are so close he would definitely miss her if she were to move on. His determination to find out what Nanana wants leads to a showdown between him the duo, which ends with Nanana surrendering after seeing the strength of his resolve. She admits that she wants to find her killer so she can kill him, regardless of whether or not she will pass on afterward, and tells Jūgo she believes he can do it even without any power to assist him, once again reinforcing her trust in him.

At first, Jūgo found Tensai annoying, as she had little manners and made herself at home in his apartment while being very loud. She later tracked him down when he retrieved the Shining Lie Detector, after threatening him. He was not pleased to see that she enrolled at his school, and has thus thought of him as her rival, most likely because he is the heir to the Phantom Thief Gang Matsuri, and has hacked into his phone many times.

Despite being annoyed at her naming him a rival to her, it is implied on many occasions that he holds romantic feelings for her. This is best displayed when he blushes and becomes flustered when they hug each other, when he tried to peep on her, and considered her disguise cute. Jūgo has also expressed some form of care for her, shown when he risked his life to save hers twice and expressed relief at her safety. He even admits to his father that he respects her abilities, even if she is annoying to him. Jūgo also jumped to her defense in his fight against Ikusaba and she did the same for him by bluffing to Ikusaba. At the end, she admitted that she is glad that he survived the brawl while he is impressed by her gloating. He seems to have an interest in her, as he blushes when they are in a compromising situation.

While she appears to think lowly and skeptically about him (due to his connections), she confesses to trusting him in actuality.

As his martial arts teacher and childhood friend, he likes to think of her as an older sister, but he has stated that she is his first love.

The class president, who seems to have an interest in him. Jūgo gets along with her and admires her dream of being novelist and considers her the most normal girl he knows since she isn't pretentious or loud on her dreams. He appears to reciprocate her feelings, as he blushes around her.

After starting to live on his own with Nanana, he's been dragged into the case of Nanana's death, to find the one who killed Nanana in order to collect the treasures of special powers―Nanana Collection. In order of that, he joined the Adventure Club of his school. 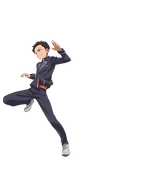 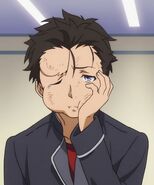 Add a photo to this gallery
Retrieved from "https://nanana.fandom.com/wiki/J%C5%ABgo_Yama?oldid=6313"
Community content is available under CC-BY-SA unless otherwise noted.