Kasumi Konjō (今生 霞 Konjō Kasumi) is one of the former residents of Nanana Ryūgajō's room whose hidden manual was found by Jūgo Yama that she left behind instructing him how to deal with Nanana.

Nothing much is known about Kasumi except that she was the President of the First Gen Adventure Club.

Kasumi is a adventure-loving woman who created the Adventure Club for the sake of adventure. 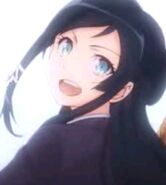 Add a photo to this gallery
Retrieved from "https://nanana.fandom.com/wiki/Kasumi_Konj%C5%8D?oldid=5971"
Community content is available under CC-BY-SA unless otherwise noted.