At the time of her death, Nanana has the appearance of a teenage girl who has long lavender hair which is tied back with a washed pale blue ribbon. Her eyes are bright periwinkle, and she wears a white halter dress edged with lilac lace.

Around her neck lies a pendant of with a glass ball possessing a small dusty-gold crystal. She walks barefoot.

In flashbacks, she is often seen wearing a seifuku or her school uniform.

Nanana is a bright self-proclaimed yet lonely NEET (Not Educated, Employed, or in Training) ghost who loves adventures and would do everything she could to reach her dreams. She spends her days bounded to Room 202 eating pudding and playing video games and watching tv.

Nanana was part of the GREAT7 who founded Nanae Island. Among them, Nanana was the one who set out on many adventures to fund the construction of the island, and her treasures are rumored to be worth trillions of yen. However, when she was in her dormitory, she was killed and couldn't attain nirvana since nobody knows who killed her.

Later it is revealed that, Nanana was stabbed by her alcoholic roommate with an magical object which made her soul immortal, being unable to move on and left bound to her room.

Nanana in the first light novel. 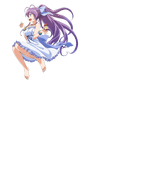 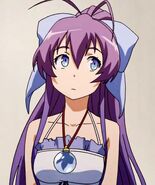 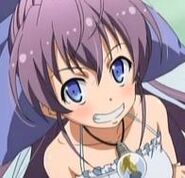 Add a photo to this gallery

Retrieved from "https://nanana.fandom.com/wiki/Nanana_Ry%C5%ABgaj%C5%8D?oldid=6114"
Community content is available under CC-BY-SA unless otherwise noted.