Start a Wiki
Tensai Ikkyū (壱級 天災, Tensai Ikkyū?) is one of the main characters of the series Nanana's Buried Treasure. She is also the lead character of the side story Tensai's Reluctant Deduction.

She is a high-school student who is a self-proclaimed "Master Detective," for obvious reasons that she has very good observation and deduction skills. However, she would also frequently find herself in trouble with the island's police not because she is a repeated young offender, through her habit of intruding in to their investigation whenever a crime happens in the island. She is also a member of the school's "Adventure Club."

Tensai is a rather short teenage girl, with a slim and petite figure who has long strawberry blonde hair cut near her chest and has golden red eyes.

Jūgo Yama and D'arc Hoshino, as well as a few other boys at their school are shown to consider her to be very attractive, in spite of her loud and obnoxious attitude.

She is usually seen dressed in either her detective attire or in her school uniform. She once took on a disguise of wearing a black wig with pigtails to fool Jūgo, who was immediately enamored at her look until he saw it was her. She has also been seen wearing cat pajamas while sleeping.

Her detective attire consists a white shirt with long sleeve and dark red vest with golden buttons. She also has a dirty white cape that was about ten centimeters long with dark red lining and dark red small tie, dirty purple-ish blue miniskirt and black thigh-highs, plus brown short boots. She also necessarily wears a dark red hat to better represent her ambition of being a master detective.

Tensai has a loud and intimidating personality, not to mention that she also has a good eye for mysteries.

Tensai is very intelligent (as shown in the anime), she is more than capable of analyzing maps, traps, and places in mere minutes, as well as finding the target. Jūgo finds her knowledge to be amazing.

She has an inflated view of herself by always calling herself a master detective and sometimes interfering in police matters. Ironically, this habit is the reason that causes her to have a bad rap sheet with the law, despite having good intentions.

She is very proud of her dream he has no problem by mockery that she receives and continues to press on.

She seems to love to rivaling Jūgo as well, always wanting him to mischief though it seems that this belays some hidden affection towards him.

She shows that she has a shy side, as she got flustered and blushed when Jūgo carried or hugged her and overacting afterwards. She is also like this when others hint at her attraction to him.

Tensai found Jūgo to be a quite interesting person for "accidentally" locating the Shining Lie Detector, and started investigating him. She later confronted him at his house, where she secretly equipped a phone hacking application to his cellphone, which allowed her to monitor Jūgo's phone's activities, and discovered that he is really the heir of the Phantom Thief Gang «Matsuri. This knowledge causes her to consider him as her rival, while he is less than pleased by this, though acknowledges her detective skill and respects her.

She often yearns for him to do criminal activities, but he ignores her. While she appears to think lowly of him and is skeptical about him (most likely due to his connections to thieves), she confesses to admiring his skill and trusting him in actuality.

Despite insisting that Jūgo is only a rival to her, it is implied on many occasions that she holds some romantic feelings for him. This is best displayed when she was grateful to him rescuing her from a fatal fall, blushed heavily when they are forced to hug each other, trying to tease him on liking her look, becoming flustered at him carrying her, saving him in his fight against Ikusaba, and being very annoyed and jealous at his perverted side to Yū Ibara.

Afterwards, she admitted that she is glad he survived the brawl but only because she didn’t want to lose her rival. She is flattered by his gratitude of saving him, smiling at him while blushing. This elicits blushing from him, as well.

Tensai has an assistant named, D'arc Hoshino/Daruku, in which the two maintain a sort of Sherlock Holmes and John Watson kind of relationship.

They are always seen together, with Tensai appearing to care for him and that they are shown to be on good terms.

Tensai is either unaware or ignores D'arc's obvious attraction to her, perhaps only seeing him as a partner or a friend. However, she has noticed hints, as she questioned Daruku on some of his intentions. 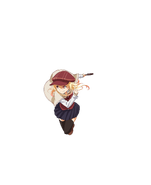 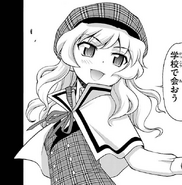 Tensai uses her taser to stun D’arc in her special place,
Add a photo to this gallery

Retrieved from "https://nanana.fandom.com/wiki/Tensai_Ikky%C5%AB?oldid=6358"
Community content is available under CC-BY-SA unless otherwise noted.